The work table provided with this band saw measures 16-inch by 21-1/2-inch. The table can be tilted and locked in a desired position. It also comes with a storage cabinet that can be placed at the bottom of the worktable. The table is constructed from cast iron.

We found Amazon.com to have the best prices on the Rikon 10-325 14-Inch Deluxe Band Saw. Click here to check it out.

The band saw has 13 inch re-sawing capacity for slicing veneers and lumber sizing. It comes with a rip fence and a re-saw bar to ensure that the blade does not go out of its guided path.

The blade guides are cast iron ball bearings. There is a quick release button for blade release which makes blade changing easy. Inset windows are provided for checking blade centering during work.

The Rikon 10-325 14-Inch Deluxe Band Saw comes with two-year warranty from the manufacturer.

There are several band saws available in the market. The Rikon is considered a value for money band saw. Reviews about this product mentioned that this band saw works well and serves for long. The re-sawing capacity is good and can be used on wood as well as non-ferrous material.

Reviews liked the construction of the saw. It has a strong construction and the two work speeds are good for most purposes. The 1 ½ Hp motor may seem less compared to other band saws, but we must note that the power of the motor is well optimized by the blade and the band.

The rip fence was also a nice addition according to reviews. Though many reviewers did mostly curving, they mentioned that for the price it sells, it is really good to include a fence. Reviews from those who used it for veneers, mentioned that it is really useful. The inset windows make it easy to check the blade centering and the blade guides themselves do a very good job.

The Rikon band saw comes with a cabinet for storage and a 4-inch dust port, for dust free workplace. It also comes with work light, and the fence with re-saw bar. It received good reviews and sells for a low price, which may further go down. 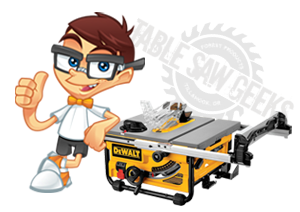 TableSawGeeks.com is a participant in the Amazon Services LLC Associates Program, an affiliate advertising program designed to provide a means for sites to earn advertising fees by advertising and linking to Amazon.com.